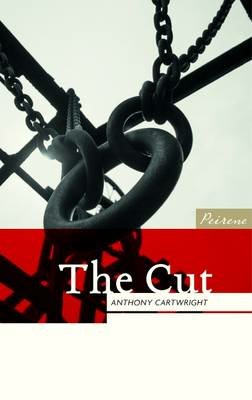 The Cut is the second title in the “Peirene Now!” series (following breach), fictions commissioned by Peirene Press to respond to current events. It is Peirene’s Brexit novel, set in Anthony Cartwright’s hometown of Dudley, which voted decisively to leave the EU in last year’s referendum.
Cartwright explores the issues around Brexit through two main characters: Grace, a documentary maker from Hampstead, who has gone to Dudley to interview people for her new film; and Cairo, a boxer who works cleaning up industrial sites and becomes Grace’s principal interviewee.

Both characters have their preconceptions challenged over the course of the novel. Grace has ideas of what her film’s narrative will be, but the reality she finds in Dudley is too complex and nuanced for that. Cairo makes clear that there’s a whole way of life which has declined over the years, for many different reasons. There’s a real sense of a situation that is almost too complex to articulate — hence the tendency to appeal to overly simplistic explanations.

For his part, Cairo finds that Grace is not quite the out-of-touch tourist that he’d assumed; instead, her arrival gives him a genuine opportunity to reflect and reconsider, to think that life could be something different after all. By focusing in on a few characters, Cartwright is able to illuminate a matter like Brexit on a human scale. The Cut is a sharp novel indeed.
A version of this review was previously published on Twitter.