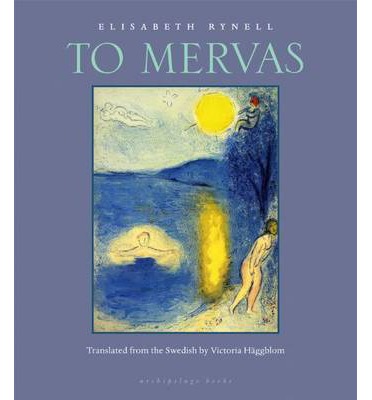 This August, Meytal from Biblibio is once again hosting Women in Translation Month; and now – albeit later than I hoped – I can join in. The first book I’ve read for this is To Mervas by Elisabeth Rynell (translated from the Swedish by Victoria Häggblom). What I want to talk about here is how R moves between, and reflects, ideas of ‘inside’ and ‘outside’.

Rynell’s protagonist is Marta, whose diary-within-the-novel begins as she has received a letter from Kosti, her lover of years ago, who says he’s in the remote northern town of Mervas (which, as far as I can tell, is fictional). The whole of the novel’s first part is written as Marta’s diary, and it reveals just how much she has withdrawn into herself, having grown up in a violent household and faced the death of her son.

Marta decides to travel to Mervas and find Kosti; her journey begins in the novel’s second part, and is written in the third person. Suddenly we’re thrown into the outside, both in terms of the backdrop to the action, and the vantage point from which we view Marta. The effect of this is the dazzle of stepping out into daylight.

The third part returns to Marta’s diary, and by now she’s reached Mervas. In this section, inside and outside bleed into each other: Marta’a first-person voice symbolically gains the confidence/authority to narrate her journey through the world; and her time in Mervas becomes a kinetic means for her to address what’s holding her back. Marta has been brought out of herself, and now she can return.

« Morvern Callar: the strangeness of ordinary lives Just Call Me Superhero: into the unknown »