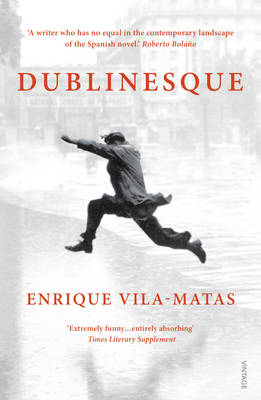 I’ve been asking myself: what is it about Dublinesque? In a previous post, I quoted a passage from Enrique Vila-Matas’ 2010 novel which says that reading can often demand that we “approach a language distinct from the one of our daily tyrannies.” When I’m thinking about how I respond to a piece of fiction, I often start with the language, because that’s what fiction is made from. In Rosalind Harvey’s and Anne McLean’s translation from the Spanish, Vila-Matas’ language seems fairly straightforward; but there’s something about it that I can’t quite put my finger on. Perhaps I’ll have managed it by the time I finish this blog post.

Samuel Riba is one of “an increasingly rare breed of sophisticated, literary publishers” who despairs at “the gothic vampire tales and other nonsense now in fashion.” He closed his publishing house after thirty years, having published numerous great writers, but without having achieved his ambition of discovering a new genius. Now Riba is a recovering alcoholic in search of a direction. There is a temptation here – especially when Riba reflects bitterly on “the falsely discreet young lions of publishing” – to generalise, and view ‘publishing’ as a metaphor, with Riba the ageing man who feels overtaken by the world at large. But I don’t think Dublinesque is quite reducible to such generalities, because literature is too bound up in Riba’s worldview: “he has a remarkable tendency to read his life as a literary text, interpreting it with the distortions befitting the compulsive reader he’s been for so many years.”

A couple of years earlier, Riba dreamed of Dublin, and now takes it upon himself to go there – or, more precisely, the Dublin of James Joyce – and hold a funeral for “the Gutenberg galaxy”. His model is the funeral in chapter six of Ulysses, he visits the city on Bloomsday… the sense of a journey shaped by the forces of literature only grows with the ‘stage directions’ that frame the Dublin-set sections, and the mysterious figures, like the man in the mackintosh from Ulysses, that Ribs keeps glimpsing.

As well as these figures, Riba is haunted by the notion that his life may be the subject of a novel. He’s right about that, of course, though the novelist is not the “young novice” whom he imagines. This means, then, that Riba is haunted by figures of whom he has no idea. Just occasionally, the third-person narration breaks into an ‘I’, a brief reminder of the writer who lies behind Riba. And behind the writer lies the reader; so perhaps this is the sense that’s been eluding me: to read Dublinesque is to be a ghost haunting the novel, with Vila-Matas’ prose providing a subtle balance of distance and closeness that lets us in just far enough. But that only really becomes apparent at the end, when the dream has faded and the book can haunt us.