Today I have a guest post from the one member of the IFFP shadow jury who doesn’t have their own blog, Jacqui Patience (@JacquiWine on Twitter). Various blogs (including Winston’s Dad, Tony’s Reading List, and The Writes of Woman) have been hosting Jacqui’s thoughts on the longlisted titles (see the end of this post for links); and now she’s been kind enough to visit Follow the Thread, with a review of Ma Jian’s The Dark Road. So, without further ado, I’ll hand you over to Jacqui… 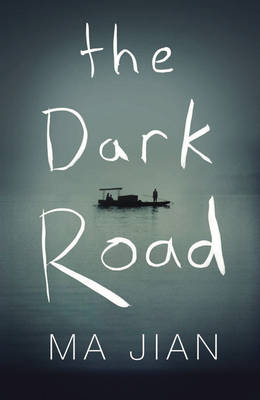 The Dark Road by Ma Jian

Translated from the Chinese by Flora Drew

The infant spirit sees Mother sitting on the edge of her bed, her hand clutching her swollen belly, her legs trembling with fear…

Meili rest her hands on her pregnant belly and feels the fetus’s heartbeat thus like a watch beneath a pillow. The heavy banging on the compound gate grows louder, the dim light bulb hanging from the ceiling sways. The family planning officers have come to get me, she says to herself. She raises her feet from the basin of warm water in which they’ve been soaking, hides under her quilt and waits for the gate to be forced open. (pg. 1)

That’s the opening section of Ma Jian’s latest novel The Dark Road. The subject is shocking and deeply disturbing as it tackles issues raised by China’s state-enforced one-child policy. Set in relatively recent times in the provinces along the Yangtze, the novel tells the story of a young woman, Meili, and her family. Meili, born into a simple peasant family, is married to Kongzi, a rather stubborn schoolteacher and direct descendant of Confucius (76th generation Kong). They have a two-year-old daughter, Nannan, but Kongzi is desperate for a son and heir to maintain the family line; daughters serve little purpose in this respect:

My brother has no sons, so it’s my responsibility to continue the family line. Our daughters will join their husbands’ family when they marry, and their names won’t be recorded in the Kong register. So they serve no purpose to us. (pg.34)

Family planning officers are combing the villages, implementing a regime of draconian measures including enforced abortions and sterilisations – any pregnant woman who doesn’t have a birth permit is given an immediate abortion together with a 10,000-yuan fine. It’s an environment where threatening slogans cry out from walls at almost every turn:

SEVER THE FALLOPIAN TUBES OF POVERTY; INSERT THE IUDs OF PROSPERITY (pg.15)

After the first child: an IUD. After the second child: sterilisation. Pregnant with a third or fourth? The fetus will be killed, killed, killed (pg. 32)

ANY PERSON FOUND TO HAVE EVADED MANDATORY STERILISATION WILL BE ARRESTED AND FINED (pg. 86)

The state’s birth control policies dictate that a couple in Kongzi and Meili’s situation can have a second child once their daughter turns five, but Meili falls pregnant too soon, two or three years before her permitted time. While Meili has been able to conceal the early stages of her pregnancy, the couple are forced to go on the run fearing for the safety of their unborn child.

The story then follows the family as they journey down the ‘Dark Road’ of the Yangtze and Gui rivers on a boat, attempting to evade the authorities in the process. They join a world of migrant workers — many of whom are also fleeing from a similar threat — as they head towards Heaven Township. For Meili, this destination represents a glimmer of light on the horizon; it’s the one place where ‘you can live in complete freedom…no one checks how many children you have’. (p 27)

The Dark Road depicts a world where women suffer repeated acts of horrific cruelty.  Scenes of enforced abortion are described in merciless and brutal detail. In the following passage, the police discover a woman heavily pregnant with her third child as she hides in the reeds near a reservoir:

The wife was dragged to the school, where family planning officers strapped her to a wooden desk and injected two shots into her abdomen. The aborted fetus is now lying at Kong Qing’s feet in a plastic basin. It has its father’s flat nose and small eyes. Scraps of amniotic fluid are still stuck to its black hair. (pg 7-8)

It’s unflinching stuff, stark in its portrayal of the sheer savagery of abuse forced upon these families by the authorities.

Once I get going, I rarely abandon a book. But in all honesty, if it weren’t for my involvement in the IFFP shadow group, I would have been quite close to bailing on The Dark Road at the 75-page mark. That’s not to say it’s a bad book; it’s well-written, the main characters and their environment are vividly painted and I admire Jian for the way he’s used fiction to expose these atrocities. But this is a book suffused with tragic encounters and shocking acts of brutality, all of which makes for a very distressing and heart-wrenching read. The only rays of hope here are Meili’s determination and her desire to seek a better life for her family…and that’s what spurred me on to finish reading this one.

While researching and writing The Dark Road, Jian posed as an official reporter to gain access to family planning offices and hospitals where forced abortions and sterilisations are carried out. He also lived as a vagrant to experience life among those on the run from the consequences of China’s one-child policy. Jian has clearly drawn on this experience to great effect in his uncompromising depiction of the horrors that haunt this corner of the world.

Finally, turning to The Dark Road’s chances as a contender for the IFFP, Ma Jian is a well-respected writer and considered one of China’s leading dissident voices. It’s a book that tackles an unpalatable topic and many of its images will linger in the mind long after the last page is turned.  Even though it’s not one of my personal favourites from this year’s longlist, I wouldn’t be surprised if it progresses to the next stage…we shall see when the shortlist appears on 8th April.

The Dark Road is published in the UK by Chatto & Windus.