END_OF_DOCUMENT_TOKEN_TO_BE_REPLACED

This is the second in a series of three posts on Yuri Herrera’s The Transmigration of Bodies (tr. Lisa Dillman). The first post is here.

The world of The Transmigration of Bodies revolves around personal and familial networks. Foremost, of course, are the crime families: by the time of that initial call to the Redeemer, Dolphin already knows as much as he wants to, as far as he’s concerned; the job he is hiring the Redeemer for will be a strictly practical exercise (there is more to be found out in the end, but that’s fiction for you). We’re also told of a time when a boyfriend attempted to abduct Baby Girl from a shop, and “someone called one of Baby Girl’s brothers – yes, everyone knows fucking everyone,” comments the narrator, wryly.

Actually, the world of Herrera’s novel does not just revolve around these networks – it emerges from them. The underworld through which the Redeemer moves would not exist without the relationships that underpin it, and that affects how we perceive the book’s reality. In Signs Preceding the End of the World, Makina crosses the border between Mexico and the US, but it’s not a precisely geographical space: it’s fuzzy. We don’t experience it as a detached observer, but from Makina’s view, peeling back layer after later as she travels on.

It’s similar in The Transmigration of Bodies: the city comes across as less a collection of streets and buildings than one of conversations and encounters, with the invisible currents of familial connection humming in the background. The Redeemer can get along in this world partly because he understands when and how to say the right thing:

He helped the man who let himself be helped. Often people were really just waiting for someone to talk them down, offer a way out of the fight. That was why when he talked sweet he really worked his word. The word is ergonomic, he said. You just have to know how to shape it to each person.

In a world of conversations and relationships, words become currency; and someone like the Redeemer knows how to spend wisely.

Signs Preceding the End of the World (2009) by Yuri Herrera, tr. Lisa Dillman (2015), And Other Stories paperback 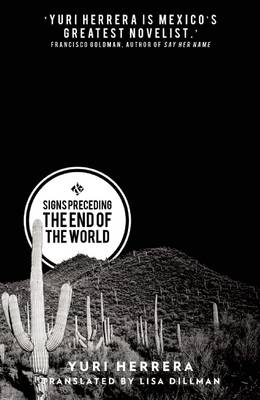