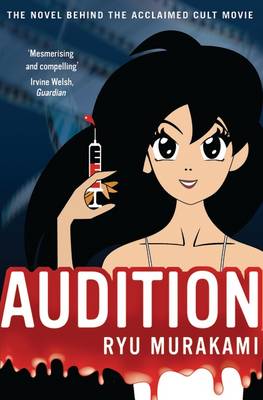 Kawashima Masayuki, the protagonist of Ryu Murakami’s Piercing (translated by Ralph McCarthy), stands over his baby daughter’s crib with an ice pick, testing his resolve not to use it. The full darkness beneath Kawashima’s outwardly happy family life is soon revealed, as we learn that he once stabbed a woman with an ice pick, and he’s afraid he’ll do so again to the baby. He convinces himself that the only way to deal with these feelings is to stab a stranger instead. So he checks into a hotel, calls for a prostitute, and waits.

The young woman who arrives is Sanada Chiaki, who has had her own demons to face in life, and is perhaps more than anything just looking to feel once again. What follows, in a chapter taking up fully half of this short novel, is a tense and fascinating game of power-plays. Our perspective shifts back and forth between Kawashima and Chiaki, as does the upper hand in a battle they don’t (at first) even know they are fighting. Both characters have their strengths and weaknesses, their resources and defences, and one can never be sure how this game will end. Piercing is deeply uncomfortable reading, certainly; but, as a portrait of two deeply damaged individuals, it’s also compelling.

Where Piercing is short and tight, Natsuo Kirino’s Out (translated by Stephen Snyder) is long and (relatively) roomy, but it shares a focus on individuals at extremes of behaviour. Four women work nights on the production lines of a boxed-lunch factory. In the heat of the moment, one kills her husband, driven to her wit’s end by his abuse. One of her colleagues, Masako Katori, takes charge of disposing of the body, gradually drawing the other women into the secret. Then the pressure is on to keep the killing hidden, from the police and other prying eyes.

For me, the character of Masako is the great strength of Kirino’s novel: psychologically, she’s quite ‘blank’ – even she doesn’t really understand what drives her to do what she does – which gives the book a similar sense of uncertainty to that Murakami achieves in Piercing by coming from the opposite direction (his protagonists are ‘known quantities’, but he creates uncertainty by bringing them together). As a thriller, Out has the same narrative momentum, and is perhaps even more dynamic as it shows greater change in its characters’ lives. But I find myself leaning towards Piercing as the more intense reading experience, with a study of character that bit sharper.

January in Japan is a blog event hosted by Tony’s Reading List.