The Year of the Flood (2009) by Margaret Atwood

The latest novel by Margaret Atwood takes us back to the world of 2003’s Oryx and Crake; though The Year of the Flood is not so much a sequel to it as a companion novel, taking place as it does in more or less the same timeframe. It’s not essential to have read the older book to comprehend the newer (though of course certain events carry more resonance if you have); and I’d say that, overall, The Year of the Flood is a better ‘way in’ to this world of Atwood’s. I would also say it is the better book of the two.

In the near-ish future, most of humanity has been wiped out by a plague. We focus on two survivors: Toby, who has sequestered herself away in a spa; and Ren, who was in quarantine when the plague hit, waiting on test results after being bitten by a client of the sex club where she worked. What the two women have in common is that both were members of God’s Gardeners, a nature-based cult whose philosophy fused science and theology (the book’s title refers to the ‘Waterless Flood’ which the cult believed would spell the end for humanity). The novel follows the lives of Toby and Ren through their time in God’s Gardeners and after, up to the fictional present, where they discover that they’re not alone.

The earliest time depicted in The Year of the Flood is still in the future from our vantage point, and it’s a future of powerful corporations, corrupt law-enforcement environmental pressures, and hybrid species created by genetic manipulation. Atwood brings to life the horror of living in this bleak world, perhaps most vividly early on, when she describes Toby’s attempts to survive after losing her parents: renting a room above a shop that trades illegally in endangered species, she first gets a job dressing up in animal-suits to advertise things; then she sells her hair; then her eggs (which leaves her sterile); before finally landing a job at SecretBurgers (where the secret is what kind of meat you’re eating.

It’s after an altercation in this job that Toby is taken under the wing of God’s Gardeners, and she becomes one of the cult’s teachers; Ren joins along with Lucerne, her mother, when Lucerne leaves her husband for her new lover, Zeb. The Year of the Flood is, for the most part, a portrait of the cult and the effect it has on the protagonists. The cult means well, but life within is not entirely rosy: some members are unable to adhere to the rules (for example, we see Zeb smuggling in meat, when God’s Gardeners are all supposed to stick to a vegetarian diet); and even the cult’s philosophy can be fluid if needs be (at one point, the leader, Adam One, talks of the need to present the cult’s theology in a way that will ‘push popular sentiment in a biosphere-friendly direction’; ‘God needs to be filtered’, as he puts it later). Furthermore, being in the cult affects the way its members deal with the world when they leave; for instance, after Lucerne quits and takes her daughter with her, Ren has to adjust to being in a ‘normal’ school, and the cult’s insistence on memorising everything leads her to mistrust the school’s methods: ‘it seemed so dangerous, all that permanent writing that your enemies could find’ – even touching the tools and products of writing leaves Ren feeling literally unclean.

This portrait of the cult and its world is, I would say, the main point of the novel: the characterisation is rather too patchy for the book truly to work as a character study (none of the characters really leaps off the page as a rounded individual); and the plot seems more or less to be just ‘life going on’ (even accounting for the Waterless Flood, which is not depicted in overly dramatic terms). This leaves us with the issues to be the primary focus of The Year of the Flood; and I find the book to be ambivalent about them.

On the one hand, the heart of the society Atwood depicts is clearly rotten; on the other, as noted, the cult is not presented in a highly positive light (and the sermons delivered by Adam One throughout the novel smack of increasing desperation as time goes on). Yet I don’t gain a clear sense that this ambivalence is really intentional. Be that as it may, these are the moments that represent for me The Year of the Flood’s key point: Toby listening to birdsong, imagining her knowledge of language being supplanted by this ‘ceaseless repetition, the song with no beginning and no end.’ And Ren telling us her motto: ‘We are what we wish. Because if you can’t wish, why bother?’ What matters, this seems to say, is the ability to imagine a changed life, and to work towards that vision. Perhaps the failing of God’s Gardeners is that they were ultimately not up to that task. Perhaps the Waterless Flood took away all chance of anyone doing that; then again, given the book’s ending, perhaps it didn’t. 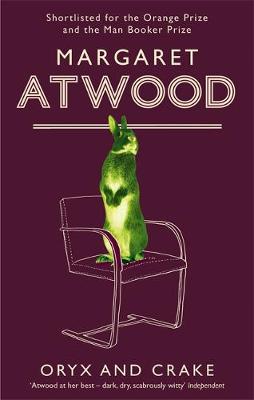