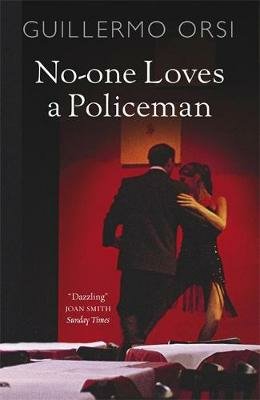 ​I picked this book up in a charity shop, based primarily on the same trust in MacLehose Press that led me to read Nevada Days. It was the first of Argentinian journalist Guillermo Orsi’s novels to be translated into English. Our narrator is one Pablo Martelli, who receives an urgent call from his friend Edmundo Cárcano one night in December 2001. Martelli travels through the night to Cárcano’s retreat in the seaside village of Mediamundo. When he arrives, he finds that his friend has been shot.

Soon, Martelli meets Lorena, the beautiful young blonde woman with whom Cárcano had fallen in love; then she is apparently abducted, and Martelli’s car taken. Pablo travels to Bahía Blanca for Cárcano’s funeral, where Lorena suddenly reappears. After a night out alone in Bahía Blanca, Martelli is beaten up, and wakes in the police station, where an inspector slaps him around for good measure. Then Martelli returns to his hotel, where he finds Lorena’s dead body in the bed. Pablo learns that the manner of Lorena’s murder resembles that of several other killings – it appears someone is trying to frame him. Martelli heads back to Buenos Aires at the first opportunity; it won’t surprise you to learn that, even after all this, his troubles are only just beginning.

Martelli himself is an ex-policeman, dismissed from an elite division known as the ‘National Shame’; these days, he sells bathroom appliances. His main allies are the inspector and officer from Bahía Blanca, whom he likens to Don Quixote and Sancho Panza; and the forensic doctor whom Martelli constantly describes as “roly-poly”. They’re not stereotypical heroic types; but this is not a tale with space for heroes.

Commenting on his country’s police force, Martelli says: “it is not Sherlock Holmes we need in Argentina, it is the will to investigate.” This sets the tone of how the plot unfolds: not the solving of an elaborate puzzle, but more a journey through a world that constantly resists Martelli’s attempts to ‘solve’ it – the plot happens to him as much (if not more) as he drives it. When a key piece of information is revealed, or there’s some other important event, Orsi will often begin a new scene and fill in what has happened in retrospect; this reinforces for the reader the sense of having to push against the novel (the world) for answers.

Corruption is rampant in No-one Loves a Policeman, along with a general sense of enervation: a dead body may never be reported, let alone investigated; and at one point a raid on a shanty town is staged just so the police are seen to be doing something. Over the course of the novel, Martelli comes to realise just where his career path has led him:

Death does not make ethical distinctions. It claws at everyone in the same way. It is a tiger living inside us, just waiting to escape and fulfil its destiny. […] Patrolling the streets of a city like Buenos Aires is to live side by side with the tiger, to let it loose in return for getting paid, to think the beast was really someone else when it mauled and then watched the dying groans impassively, refusing the hand held out for us at the last. To be a policeman is to shut your eyes, stuff your hands into your pockets, and let people die.
(translation by Nick Caistor)

No-one Loves a Policeman is set at a specific moment in Argentina’s recent past: a time of economic crisis and popular riots, which resulted in the resignation of president Fernando de la Rúa. This is more than background, as Orsi ties the events of his novel firmly into history, ultimately heightening the sense of circumstances that are too great for individuals fully to grasp or change. No-one Loves a Policeman is grim yet absorbing, its narrator facing the inevitable with wry wit because that’s just about all he has left.